I’ve been trying to figure out how to write this post ever since I started this blog series. I’m not sure I can convey what Robin Hobb means to me as an author. She’s my all-time favourite writer. She’s my greatest influence. Her stories pull me in and shake me up like no others. I have a circle of wonderful friends I wouldn’t have without her books. I’ve met her twice, and have five of her books signed. Her stories are magic… beyond compare in scope, depth, and intricacy.

And nothing about that paragraph does justice to how I feel about her work. The only way I know to share that feeling is to get people to read her books. But I started this blog series knowing she was top of the list… so here goes.

I received Assassin’s Apprentice from my best friend for my 18th birthday. I’d never heard of Robin Hobb, and my friend hadn’t read the book either – she was drawn in by John Howe’s stunning cover art, which turned out to be the best example ever of why you should sometimes judge a book by its cover: 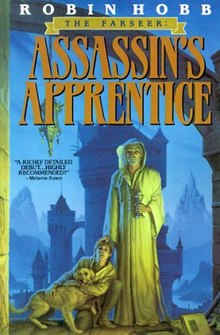 That little paperback remains one of the best presents I have ever received. Not only because the story it begins is the greatest rollercoaster ride I’ve ever been on, but also because of all the paths that opened up as a result. Amazing, lifelong friends. Fellow writers with whom I began my writing adventure. Places I’ve visited. People I’ve met. Spectacular memories. All of which stemmed from a birthday gift (admittedly, from one of the people who knows me best in all the world).

Robin Hobb’s books are addictive beyond measure. Her prose is supremely elegant – beautifully wrought without being the least pretentious. Her ideas and the massive scope of the worlds she weaves provide an intricate playing board for her characters. And such characters…

FitzChivalry Farseer isn’t just my favourite novel character ever. He’s almost a friend. In any other context, that would sound more than a little weird. But Fitz’s first-person viewpoint is so consuming, so intimate, so unflinching, that you can’t help but know the man, inside and out. Over the course of eight (soon to be nine) long books, his detailed narrative has got into my head like no other. I see the world through Fitz’s eyes in a way no other first-person narrative has ever managed to convey. It’s the depth, it’s the magnificent crafting of character, it’s Hobb’s superlative writing.

Fitz’s relationships, particularly with the Fool, are what carry the story forward. Yes, there’s war and political strife and evil baddies. There’s magic, subtle but crucial to the world and plot. There’s upheaval at every turn. But the relationships Fitz forms along the way are the real hooks. They enable Fitz to shine even as they highlight his copious flaws. They’re wracked with intrigue and wonder and terrible heartbreak. They’re why I come back to these books again and again.

Of course, the Farseer, Tawny Man, and Fitz and the Fool trilogies are only part of Hobb’s magnificent Realm of the Elderlings. The Liveship Traders books are like a fine tapestry of complex characters and epic worldbuilding. The Rain Wild Chronicles build further on this and add consequences and ever more layers to this rich universe. There are so many threads and so much detail, and all along there’s the feeling that Hobb is working some amazing magic trick as everything slowly comes together to form an immense picture. It’s glorious. Unputdownable. The definition of immersive.

Then there’s the Soldier Son trilogy. And The Inheritance, Hobb’s collection of short stories. And all of her wonderful books written as Megan Lindholm. Her stories are an absolute treasure trove of gems waiting to inspire.

This is how fantasy should be done. These books are what the supercilious detractors of fantasy need to read in order to grasp what the rest of us are raving about. These books are why I read. When I’m not having this experience through reading Robin Hobb, I’m reading something else in the hope that it might come close. It rarely does.

Hobb is where my heart is.