I was honoured to be published as Daily Science Fiction‘s very last story of the decade! ‘Objects Left Behind At the Sea of Tranquillity Public Library’ appeared on the 31st of December 2019, which was a lovely way for my year to round off. It’s my bittersweet story about the things we all stand to lose as a result of unchecked climate change, and its core theme of devastating wildfire has never been more relevant.

This was one of three original stories I had published last year. The other two were ‘Doomsday in Springtime’, which appeared in Galaxy’s Edge in July and ‘What the Sea Reaps, We Must Provide’, which appeared in Diabolical Plots in May. All three are eligible for awards reading, and they’re all flash fiction.

The one I’m mainly promoting is ‘What the Sea Reaps…’ which was received very well and had some lovely reviews. It also made the Quick Sip Reviews 2019 Recommended Reading List, which places it amongst some excellent company! I personally feel this is the best piece of flash I’ve written to date, and its subject and setting are very close to my heart. It’s available to read at the above link, and I’d love anyone reading for awards to consider it.

‘Objects Left Behind…’ is also available to read at Daily Sci-Fi, and if you’d like a copy of ‘Doomsday in Springtime’ I’d be happy to email one. Just drop me a line at proofyourwork[@]rocketmail[dot]com.

I also have a favour to ask. If you did enjoy ‘What the Sea Reaps…’, whether you’re reading for awards or not, can I ask if you’ll sign this petition? The beach and sea wall the story is based on are under urgent threat of catastrophic rail development, and we need as much objection as possible in order to halt this plan. I’d be deeply grateful if you’d lend your name to the cause. Thank you.

Whoa, it’s been a while since I updated. Poor little blog.

I have a fair bit of news from the last few months! I’ve mostly had my head down working on a new novel. This time I actually got my act together and managed to outline properly, from start to finish, which is something I’ve never done with a novel before. That’s why the last one took me so damned long to finish. But it’s made such a difference this time. I went in entirely confident with where I was heading, yet still with room to explore and discover things as I went along. So I had all the structure of outlining with plenty of the surprises of pantsing built in. I may have found my perfect method.

I started the draft in July. I finished it last week. That is a massive record for me. I’ve still got plenty of work to do before it’s ready for beta readers, but I’m really happy with what I’ve got so far, and amazed at how much faster the process has been this time.

In other writing news, I’ve had a couple of new things out since I last posted. ‘The Convincer’, which first appeared at Galaxy’s Edge, came out at StarShipSofa in July. The narration is superb, and it’s great to be able to share this story with no paywall. I was delighted with how it turned out, as this story remains one of my favourites. Go have a listen!

I had another story out in Galaxy’s Edge, also in July. ‘Doomsday in Springtime’ is a weird, slipstream story about worlds connecting through fiction, and loving someone whilst knowing their whole story in advance. It’s been close to my heart since I first wrote it several years ago, and I was delighted it found such a good home.

I’ve recently sold a story to Daily Science Fiction, which will be my second appearance with them. ‘Objects Left Behind At the Sea of Tranquillity Public Library’ (my longest title to date) is a post-apocalyptic piece of flash about the deep memory connections objects can have for us, and how loss can be measured in small things as well as the huge ones. I’m not sure when it’ll be out, but watch this space for updates!

And to invoke Galaxy’s Edge once again, I’ve just sold a third story to them. ‘Lux Nocturna’ is a dark Halloween tale of one woman’s task to keep monsters at bay through the power of music. I can’t wait to share this one when it comes out.

It’s been a busy few months! I’ll try not to leave it so long next time…

My newest story, ‘What the Sea Reaps, We Must Provide’ is out today at Diabolical Plots!

This is my favourite piece of flash I’ve written to date. It’s about the power of nature, and protective sacrifice, and the weird between-worlds feeling of a seaside town. It’s about dogs, too, and features a very real setting I have walked many times.

As well as being available online today, this story also features in the Diabolical Plots Year Five anthology, which came out last month and contains all Diabolical Plots’ upcoming stories for the year. There is some terrific stuff here… I’ve been working my way through the stories and am honoured to be in such great company. The stories are all perfect coffee-break length and I highly recommend the read.

Also, check out the stunning cover art by Galen Dara:

Go forth, read, and be awed by the power of the sea.

I’m a little late to this, but I did have one awards-eligible publication last year, so I’d love it to be considered by anyone who’s reading and nominating.

My 6,000-word sci-fi story, ‘The Convincer’, was published in the November edition of Galaxy’s Edge. I’m honoured that it’s made the Nebula Reading List.

An invasive interdimensional alien race justifies their abuse of humans on the grounds that humans lack the aliens’ abilities and comprehension. One alien dedicates herself to ending this injustice, but reaches an impasse until a remarkable human appears and brazenly countermands the status quo.

This story portrays my still-recurring themes of women scientists and humanity from a non-human perspective, and I hope it holds something of a mirror to our continuing poor treatment and disregard for species other than our own.

“Our capabilities did not make us superior, only different.”

As of this post, it’s still available to read for free on the website, but will likely be archived soon. I am more than happy to email a copy to anyone who’s reading for awards this year – please let me know in the comments, or email me at proofyourwork [@] rocketmail [dot] com.

Flame Tree Press has published a two-part Q&A from the authors of its Robots and Artificial Intelligence anthology, in which we talk about our writing processes, the stories that have influenced us, and the inspiration behind our stories. If you’re interested, you can read the mini-interviews here:

My contributor copies arrived this week, and they are gorgeous. So delighted that one of my stories has made it into something this pretty! 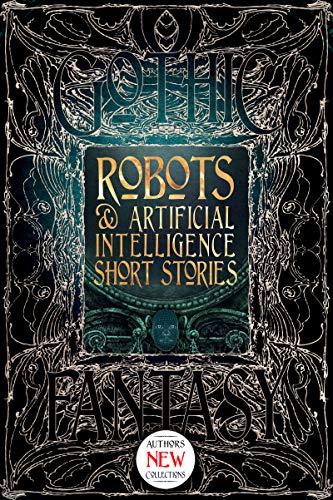 If you want to get your hands on one (and, honestly, why the hell wouldn’t you?), order here or ask in your local bookshop.

And now, if you’ll excuse me, I’ve got robot stories to read.

Time for an update, seeing as there are things to report!

I finished the novel revisions. *victorious* (This round, at least.) Completing them was a great relief whilst slightly daunting, wondering if I’ve done enough and knowing that the next step is to get a submissions package together and start querying agents. But, yaaay! The first draft is no more! Now to rewrite the entire thing using only 2% of the words. Synopsis time… sigh.

I recently sold my flash story, ‘What the Sea Reaps, We Must Provide’ to Diabolical Plots. It’s about seaside towns, and dogs, and sacrifice, and I’m really happy it’s found such a great home. I can’t wait to share it when it’s out next year.

And Flame Tree Publications’ Robots and Artificial Intelligence anthology, featuring my story ‘Daddy’s Girl’ amongst a host of others, is now available for pre-order! These anthologies are beautiful hardcover books, gorgeous on shelves or as gifts or just to lovingly gaze upon. This title is out in September in the UK, and apparently November in the US (according to Amazon). If you want a copy, get your orders in now!

Look at the shiny:

Ahhh, novel revisions. Feedback has returned, notes have been made, and I am currently wading through it all while fighting the almost constant urge to procrastinate. Once I get in there and start making changes, it’s fine, but actually making myself get on with it has been harder than I anticipated. It feels so daunting from the outside, but once I’m immersed in the manuscript I realise it’s really not so bad after all.

Revising stories has never been my favourite part of writing, but it’s always incredibly satisfying once it’s done. That feeling of pruning, shaping, polishing. Adjusting this and that to get the story just right. Adding details here, cutting extraneous words there. It’s a great feeling when it’s working.

Novel revision is an order of magnitude greater than revising a short story, mind you. And I don’t even have anything massive to change here. There’s nothing glaringly wrong (which was a relief), but there are a cluster of things that, once implemented, will definitely enhance the story. It’s weaving them in that’s the tricky bit.

I’ve been here before, but it’s never felt quite as momentous as this. Maybe because this novel feels so different from the previous ones. Maybe because it’s that much more personal. I have a need to do this one justice that didn’t strike me the same way with the others. Maybe I just believe it in more.